Read Alwyn Marriage’s beautiful poem about Hildegard von Bingen from the site on Women’s Literary Culture and the Medieval Canon. 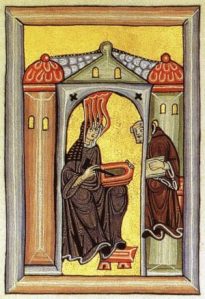 Hildegard: Doctor of the Church

Hildegard believed that herbs for the body’s healing

had a part to play, with prayer, in the soul’s salvation;

and perceiving the greening of earth and heaven

from far beyond our human understanding,

she celebrated Viriditas, the force that flows

through all that’s green and good, in all that grows.

she posed a challenge to the Church,

in books the clergy knew,

communicated in an alphabet they couldn’t read,

and if they could, they wouldn’t understand.

Down the centuries we hear her songs of glory

above the black-clad choir stalls

of those who failed to grasp that wisdom

could be grounded in a woman’s native wit.

As she joins the other doctors of the Church:

along with sundry men, the question hovers:

will those without a voice today