One thing to keep in mind: the information about medieval children is constantly being developed and uncovered.

Fiction can give us a sideways glimpse of history. For example, we can figure out that women sang lullabies to their children. How do we know? Many songs exist in which the Virgin Mary sings such calming music to her child, Jesus.

This yonder night I saw a sight,

A star as bright as any day,

And ever among a maiden sang

This maiden was Mary, she was full mild,

She kneeled before her own dear child….

She soothed him, she blessed him,

Nursery rhymes, references to games, and carols suggest a lively presence of children in the historical and literary record.

Here below, student Allison Estrada-Carpenter was excited to explore the complex issue of medieval childhood.

Ideas of Childhood  in the Middle Age

The study of childhood became popular among academics in the 1960s and 70s. It is important to note that the recent scholarly consensus on medieval children believes “people in the Middle Ages did recognize the life stage of childhood and distinguished it from adolescence and adulthood” (441 Hanawalt). This presentation will discuss four significant elements of the medieval childhood experience, including: 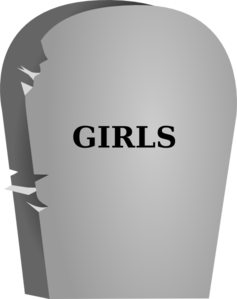 ( Tombstone art made through Clker.com)

ORIGINS OF THE MOODY, HUNGRY TEENAGER

Youth are described as “lean (even though they eat heartily), swift-footed, bold, irritable, and active” (Bede as qtd. in Hanawalt 443). Parents would give their children advice similar to what teens hear today:

– do not waste money

(Click on picture for more information on the role of adolescents in war).

Boys in the nobility class generally completed their military training when they were 15-17 years old. Girls in the nobility class were usually educated on how to be a wife. However, women like Christine de Pizan did suggest “teaching young noblewoman the proper way to conduct a budget and even instructing them in land laws” (Shahar 221).

“We should remember that most children would have grown up with a number of siblings or half-siblings. Margery Kempe famously had fourteen children” (Goldberg 257).

“In the late Middle Ages, Europe became pre-occupied with rearing and educating children and youth for successful passage into  the adult world” (Hanawalt 443).

“The proclaimed aim of education was to raise a Christian human being and it was universally emphasized that Christian morals took precedence over worldly knowledge and vocational skills” (Shahar 166).

It was also important to develop certain traits like modesty, chastity, and obedience. All of these traits, especially obedience, were stressed more for girls than boys.

Except history has shown that not ALL medieval women were obedient. 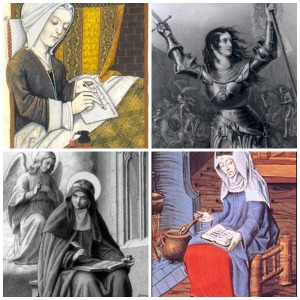 (Clockwise, from top left, images not from life:

Scholars, notably Hanawalt and Boswell, note the grief medieval parents experience at losing children. Unfortunately, this was very common in this time period. “Infant mortality ran from 30 to 50% primarily because of harmful bacteria” (Hanawalt 450). She also asserts that some male infants may have lived longer because they were given nursing preference and had more access to wet nurses.

Children would often “play” chores and die as a result.

Adolescent males often died as a result of playing

However, it is important to note that “deaths involving children are unlikely to have been consistently reported” (Goldberg 255).

Boswell, John. The Kindness of Strangers: The Abandonment of Children in Western Europe from Late Antiquity to the Renaissance. New York:Pantheon, 1988. Print.